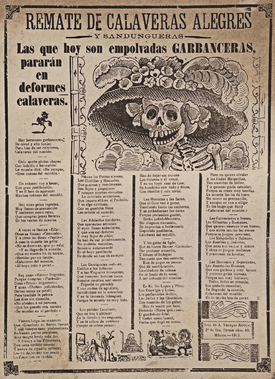 La Calavera Catrina, or the “Elegant Skull” is the quintessential representation of Day of the Dead celebrations in Mexico. Her incarnation is seen as early as 1910 by Jose Guadalupe Posada who originally depicted her as a mocking of the aristocracy, an indigenous person imitating French style. Made famous by Diego Rivera, and many other Mexican artists, Catrina became the mocking reminder that death equalizes all. The figure herself is a satirical reminder that death shows that everyone is equal. Mexican art associated with the Day of the Dead, various images of the Catrina are often, and clearly, humourous. Big smiles and playful stances, but cloaked in European finery, mocks the traditions, the cultural impositions and the seriousness of all kinds of colonialism. For real native bones still lie within. In a polarizing world of cultural clashes, socio-economic inequality (both then and now), Catrina stands tall. With strong ties to political and social satire, she stands with poise: laughing, and reminding us, in an artful, cross-cultural mish-mash of messages, that we must laugh, dance and ridicule oppression. Even in the face of death. This is the colourful rebellion. 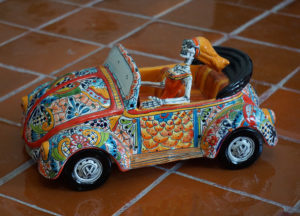 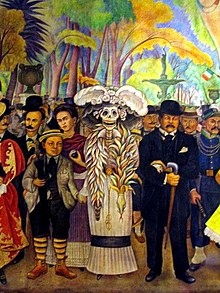 Located in the Heart of Edmonton's Little Italy

Enter the following details for delivery.